Match Russia-India at the 2008 Chess Olympiad

In the 4th round of the 2008 Chess Olympiad, weakened India (World Champion Viswanathan Anand is taking rest) was paired against the heavyweight Russia. The teams exchanged wins on boards two and four, and then Krishnan Sasikiran suddenly signs a draw in the better position against Vladimir Kramnik on board one. Somewhat odd decision, having in mind that GM Ganguly was in trouble against Alexander Grischuk, that can only be atributed to time factor – Sasikiran had 3 minutes for the remaining 5 moves, according to the official website. Ganguly indeed lost and India suffered 1.5-2.5 setback. 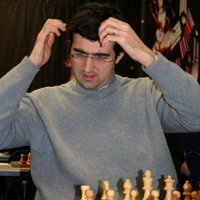 Vladimir Kramnik had to fight his way to a draw