GM Villamayor will comment the games of Wesley So from Corus Chess 2010 live on Chessdom.com 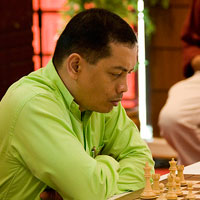 GM Buenaventura “Bong” Villamayor has joined the commentators team of Chessdom.com! GM Villamayor has confirmed his availability for the duration of the Corus 2010 chess tournament and will be commenting the games of Wesley So from Corus B.

GM Buenaventura “Bong” Villamayor is one of the top chess players of the Philippines. He is born on the 4th of May 1967 in Mauban, Quezon, and graduated Far Eastern University in 1990. He learned chess at age of 4 from his mother Elena, but “My brother bought me my first two books, Capablanca’s Chess Fundamentals and Botnivik’s 100 Selected games,” says GM Villamayor.

GM Bong Villamayor becomes national master during the 1998 Philippines national chess championship and received his IM title during the Chess Olympiad in Elista the same year.

For the Philippines chess chronicles, GM Villamayor shares how he got his GM title in 40 days, “I was supported by the Philippine Chess Society. Starting 2000 I temporarily stopped teaching chess and trained myself for four months from January to April. By May I left the country and played in the strong Indonesian Bali Open. 24 grandmasters playing and I placed equal 1st with three grandmasters.
Next was playing in the Vietnam Asian Zonal, finishing equal first and qualifying for the World Championships but no GM result.
Right after the Zonals, they (Philippine Chess Society) gave me a chance to participate in two Vietnamese GM circuits and I was able to win both of them. Tied for 1st on my first try and solo 1st in the second event. I gained the two GM norms here then I came back to Manila and placed 3rd in the Equitable Card GM Classic Invitational. That was the 3rd and final GM result, 40 days 3 results.”

After coaching abroad, GM Villamayor returns to the Philippines in 2008 with the idea to to qualify for the Olympiad in Dresden.

Since 2009 GM Villamayor is involved with the DEPED-NCFP Chess in the Schools Program. “Once chess is implemented in schools, awareness will grow and more kids especially in the provinces will be able to learn and play,” says Villamayor.

Again with the idea to bring chess to a higher level in the Philippines and to give international promotion to one of its top players, GM Villamayor will comment live the games of Wesley So from Corus 2010 on the top world’s chess website Chessdom.com.

Games start on January 16th and more than 100 000 chess fans are expected to join daily.